If you have ever tried to buy a razor, you have most likely heard of Gillette safety razors.

This is a company that has been creating innovative shaving products for over an entire century, so they are definitely doing something right. If you have never purchased a razor from them, but are interested, you have come to the right review to find out more.

We are going to be reviewing the Gillette safety razor to see if it still holds up and is a worthy option of your money and time. First, let’s talk about what we consider in a review and how we will be rating the product.

How We Are Reviewing the Gillette Safety Razor

It is extremely important to us that our reviews are as honest and accurate as possible. Ensuring that our content is trustworthy helps you find the best products for your needs. For our review, there are a few different sources we use to help us research and create the best content for you.

One aspect that we look into thoroughly is the specifications of the product. This allows us to ensure that the product is high quality, made of decent materials, and is made well. On top of that, it allows us to pinpoint any potential problem areas, issues, and/or highlights.

We also look into the brand/company that is creating and selling the products we review. This is vital because it allows us to see what the company does to make the items, as well as the materials they use, the customer service quality they have, and how they handle processes like returns and refunds.

Lastly, we make sure to read and research through customer reviews and testimonials. This gives us a much wider spectrum of thoughts and opinions on the products we are reviewing, and it allows us to see what people really loved and really hated.

For this particular review of the Gillette safety razor, we are going to be considering a few other specific things. How the razor has changed/evolved over the years, performance, pricing, abilities, and convenience will all be heavily weighed.

The History of the Gillette Safety Razor

Gillette actually created the very first safety razor, so there is quite a lot of history behind this product.

In the year 1903, more than 100 years ago, Gillette introduced the world to the first ever system razor. This was a safety razor consisting of two pieces with a strong, thin double-edged sharp blade attached to a handle that could be reused. This product was almost instantly popular, and they have sold millions and millions of them.

This original razor was known as the Gillette Platinum-Plus Double-Edge Blade, and you can actually still buy it here today.

A few decades later, in 1971 to be exact, Gillette decided to get a little more creative and innovative with their razor designs. They launched the Trac ll, which is the first ever safety razor to be built with twin blades.

Only a few years later in 1977, the company again improved on the safety razor with the Atra/Contour system. This provided men with the power of the first cartridge with twin blades as well as a pivoting head. This allowed the blades to more easily follow the contours of the face, providing those who used it with a much closer shave than before.

Almost ten years later, Gillette created their first razor with a lubricating strip in 1985. Adding this strip to their already innovative designs made the glide of the safety razor over the skin made this a favorite among the majority of men shaving their faces.

In 1990, the Sensor safety razor’s twin blades were individually mounted on incredibly responsive springs that automatically adjusted to the contours of the person shaving’s face.

The MACH3, which is the first safety razor that included three-blade technology, launched in the year 1998. This design has continued to be modified over time, expanding the abilities of this razor with the MACH3 Turbo. The newer version of this design has a much larger skin guard as well as additional lubricants.

In 2006, Gillette came out with the Fusion safety razors, which have both power and manual versions. These razors feature five blades and are said to surpass their last design (the MACH3) when it comes to comfort. A few years later, in 2010, they came out with the Fusion ProGlide, which offered much thinner and finer blades that offered better precision.

The GILLETTE BODY was introduced in 2014, which was the first razor built for handling all the different aspects of “manscaping.” Within that same year, they came out with the Fusion ProGlide with FlexBall Technology. This is a multi-pivoting razor that was built to ensure it could come in contact with every contour of your face.

In 2015, the Fusion ProShield began to offer lubrication both before and after the blades, making it the most innovative option to protect your skin against irritation.

So, what about the company’s razors now? Let’s take a look at the current Gillette safety razors to see if they hold up to the innovation and quality of the past 100 years.

If you go online to shop for Gillette razors now, the only current designs you will see on their website are the MACH3, the Sensor, and the Fusion razors. We will get into each of these individual designs on their own, so you can decide which one would be the most ideal for you. 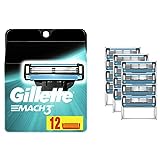 The Gillette MACH3 Turbo razors have blades that are stronger than steel and are said to stay sharper for a longer period of time than the company’s Sensor razors. The MACH3 Turbo blade refills are built to last you for 15 comfortable shaves.

This design has a long-lasting lubrication strip that ensures that you simply glide it over your skin without worrying about it catching and cutting you. It also has a microfilm skin guard that gently stretches your skin and prepares your facial hair to be cut by the blades.

You are able to get disposable versions of this design or a reusable handle that can have the blades replaced. This is available online anywhere from $ to $.

The Sensor design from Gillette is a disposable razor that gives you 7 clean shaves and less nicks and cuts than other razors on the market. These are very affordable razors that give you the quality that you would normally pay a lot more for.

This razor has 3 spring-mounted blades that will easily adjust to your skin surface to ensure a smooth, close, and comfortable shave. It also has a Lubrastrip for an easy glide across your skin, and the handle has improved Ultragrip for comfort and safety. You also get a fixed head on this razor for precision shaving as well. 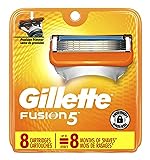 Last but certainly not least, we have the Fusion razors from Gillette.

The most recent version of this design, the Gillette Fusion5, has a lot of great features. This design features 5 separate anti-friction blades and offers you lubrication before and after them to shield your skin from any potential irritation while you shave.

The razor handle features FlexBall technology which responds perfectly to the contours of your face and gets every single hair there. The Precision Trimmer on the back of the razor is perfect for the really hard-to-reach areas and for styling your beard and/or mustache.

One razor blade refill is a full month of shaves, so the replaceable design is fairly affordable as well.

You can purchase this razor from the company website for between $ to $.

Now that we have taken a look at the features that Gillette razors have to offer, let’s take a look at what other customers think of their products.

One of the most common praises we saw about the Gillette safety razors were simply about how experienced the company was, and how the fact that they have been around for over an entire century made them a top choice for their customers. Buyers also really loved that they kept modifying and improving their current designs, and never really seem to rest from trying to make their products better.

Another aspect that customers seemed to love was the pricing. While you won’t find a lot of safety razors that are too expensive, these are really a fantastic price for the quality that they offer. Many reviewers were thrilled with how affordable these designs were, even with the company’s huge following.

The performance of the products was praised frequently as well. There were many different reviews discussing how these products gave them the best shave of their lives, and that Gillette was the company to go with for a quality looking shave.

Lastly, we noticed that a lot of buyers really loved how durable and long-lasting the blades were for the Gillette razors. No matter which design they bought from the company, reviews raved about how long a single refill would last them and how affordable it made the whole purchase.

There weren’t too many negative aspects in the customer reviews for any Gillette products. The only downside we saw among customers was simply people getting used to a specific design from the company, and then trying another design and not liking it as much. This happened within all of the different options that the company offered, and it was often really small complaints like the amount of lubricant, etc.

The only other complaint that we saw was from those customers that like to use their razors in the shower. There were a few mentions that the Gillette safety razors with plastic handles were a little too slippery to use in running water and became a safety hazard. Keep this in mind if you frequently shave while in the shower and have one of their products with the plastic handle.

Overall, we really don’t have any negative things to state about this company and their products. The Gillette safety razors are an incredible staple in men’s grooming and will most likely continue to be so throughout the years. Making shaving products for over 100 years has definitely helped this company stay at the top of their game for so long.

We do recommend that you keep in mind what you are looking for in a razor and your shaving experience. It is a rather personal decision for people, so what you like will be different from what others want in their razors. Make sure that you choose a razor that has what you want and need.

What is your favorite razor from Gillette?