What Is William​​​​s Lectric Shave?

Williams Lectric Shave is a product that men can use before shaving. You use it when you are doing a dry shave, meaning that you’re shaving right out of the shower and you aren’t using any sort of shaving cream. A dry shave is typically quicker than a wet shave, but wet shaves tend to give closer, better shaves. Wet shaves may be the only option for men who deal with very sensitive skin and ingrown hairs.

Any sort of pre-shave product is designed to reduce the amount of time necessary to get a good shave and to increase closeness while decreasing the amount of irritation experienced. The purpose of a pre-shave product is to remove oils from the skin. This will make the hairs stand out straighter and result in a closer shave with less effort. It will also reduce razor burn and make the shave more comfortable.

If you’re a man who would like to have a closer shave and less pain while dry shaving, then trying a pre-shave product like Williams Lectric Shave may indeed make the experience more pleasurable for you with a better result.

What Is in Williams Lectric Shave?

This is the ingredient list of Williams Lectric Shave:

Overall, it’s a pretty simple product that doesn’t include many ingredients. Most of this list is comprised of preservatives so that the product has a long life on your sink next to your razor. However, even if you generally have sensitive skin, you may want to give Williams Lectric Shave a try. It’s not too expensive, and many men who otherwise have very sensitive skin don’t react negatively to Williams Lectric Shave.

Well, this is the ultimate question, right? You want to make sure that the product works before you buy it. Again, a prerequisite to a successful dry shave is to have the skin and the hair as dry as possible. This is where Williams Lectric Shave is supposed to assist.

Using Williams Lectric Shave is pretty simple overall. Basically, all you need to do is put a dime-size amount in your hand and massage it on your beard. Once you do this, let it sit for about 15 seconds or so to dry out and work its magic.

Particularly if you have a cheaper electric razor or if you are the sort who constantly gets razor burn, it’s definitely worth a try to see if Williams Lectric Shave will improve your experience.

However, many testers reported that Williams Lectric Shave did leave their skin feeling a bit noticeably oily after use. Some found this unpleasant, but others weren’t too bothered by this. Also, some testers didn’t really care for the smell (which is reasonably strong and will definitely leave a boozy whiff in the air when you first apply it), but others were reminded fondly of a barbershop.

Another plus of the Williams Lectric Shave is that it won’t clog up your razor, so you won’t have to spend a lot of time cleaning it out. Again, a few extra moments in the morning can make all the difference in the world. 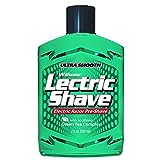 You can get Williams Lectric Shave at most pharmacies or grocery stores that sell beauty products: it’s a pretty commonly-available pre-shave treatment. You can get it in either 3 ounce or 7 ounce bottles; as with most products, purchasing the 7 ounce bottle generally results in a better price.

How Does Williams Lectric Shave Compare to Other Options on the Market?

Of course, Williams Lectric Shave isn’t the only option out there when it comes to pre-shave treatments for your skin. We’ve done some research on other pre-shave gels for the sake of comparison.

However, Afta does get more negative reviews on its scent than Williams Lectric Shave’s fragrance so if you have a sensitive nose this may not be the best option for you. Plus, most reviewers say that Williams Lectric Shave works better at getting a closer shave than Afta does. Again, this is going to depend on your skin composition. 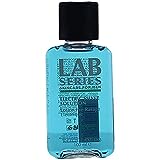 If you can’t use any sort of product on your face that contains alcohol, you may want to take a look at Remington Face Saver Powder. This is essentially compressed talcum powder in a stick, which makes it a lot easier to apply to your face. Like the alcohol-based pre-shave solutions, the Remington Face Saver Powder makes the hair stick out more and makes it easier to get a closer shave.

The main negative to the Remington Face Saver Powder is that it’s messier than many other pre-electric shave solutions. The powder tends to accumulate inside the razor, which makes removing it a bit of a mess (it will poof up into the air and get all over the floor). To avoid this, users often recommend letting it accumulate inside the razor for a bit and then emptying it outside. Plus, it’s important to use the brush that came with your electric shaver to brush out the hair and powder from the blades. Otherwise your blades will dull a lot quicker.

Plus, Williams Lectric Shave is pretty affordable. It’s not the cheapest pre-electric shave product on the market (that award generally goes to Afta), but it’s also not one of the most expensive options either. It’s also less messy than powders. Most men like the way it makes their faces feel, unless they have a specific dislike for the oily or plump sensation that Williams Lectric Shave gives.

The main negative is probably the scent. Again, most users reported that Williams Lectric Shave is far less offensive to the olfactory system than Afta is, but the fragrance is still pretty noticeably strong. How offensive this is depends on your nose (and the noses of the people that you live with).

Our Verdict on Williams Lectric Shave

Overall, we think that Williams Lectric Shave is a great value for the money and we were pleasantly surprised at how well it works. If you are looking to spend less time on your daily shave and want to get the closest electric shave possible, then we definitely recommend giving Williams Lectric Shave a try. If it doesn’t work for you, you won’t have wasted a lot of money, as it is not incredibly expensive. So we recommend giving it a try.

Overall, it’s a good product, provided that you don’t have a sensitive nose or overly delicate skin. There were some testers who remarked that Williams Lectric Shave was irritating, but this is probably due to the alcohol content of the formula. If this is a problem for you, then we recommend a product like Remington Face Saver for a similar result.